Web marketing is evolving quickly, which means the ability to plan strategy effectively (fewer than 30 percent of B2C marketers have a documented strategy) and making data-driven decisions will continue to grow in importance.

We’ll continue to see methods like influencer marketing and native advertising increase in prominence as well, given the diminishing reach of organic social-media marketing and the sheer number of content messages consumers are receiving every day. It’s getting harder and harder to get content seen, and these two techniques offer a quick bypass for reaching customers who are already engaged.

That said, we will pick one technique or tool to focus on, email marketing.

Studies consistently prove email marketing is one of the most effective marketing strategies out there.

For instance, a study by Gigaom asked marketers to rank their most effective digital-marketing tactics, and the responses unanimously pointed to email as the best method for achieving awareness, acquisition, conversion and retention. 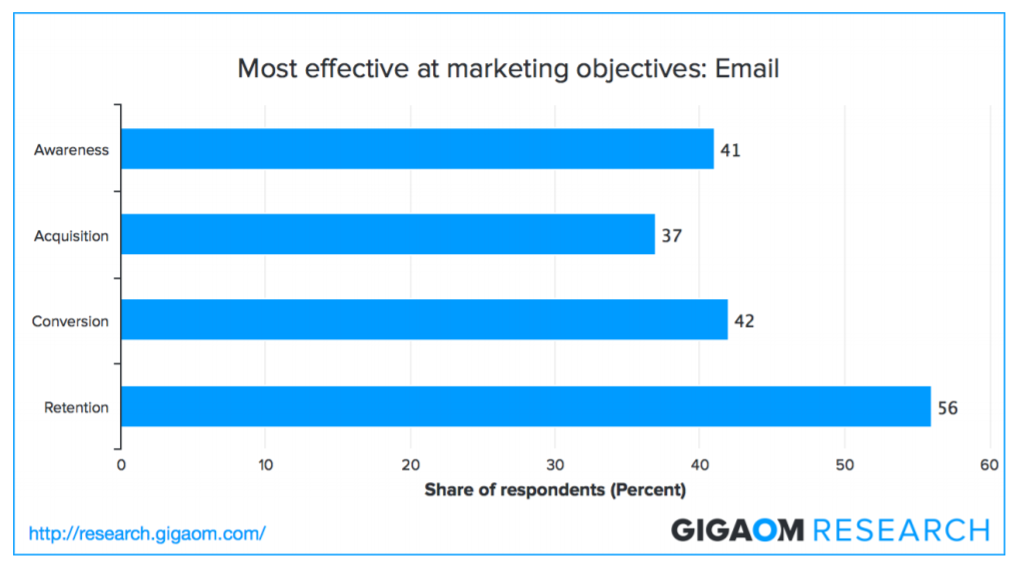 Further research from the Content Marketing Institute and MarketingProfs indicates that, among companies surveyed, email represented the most important metric for determining content marketing success. 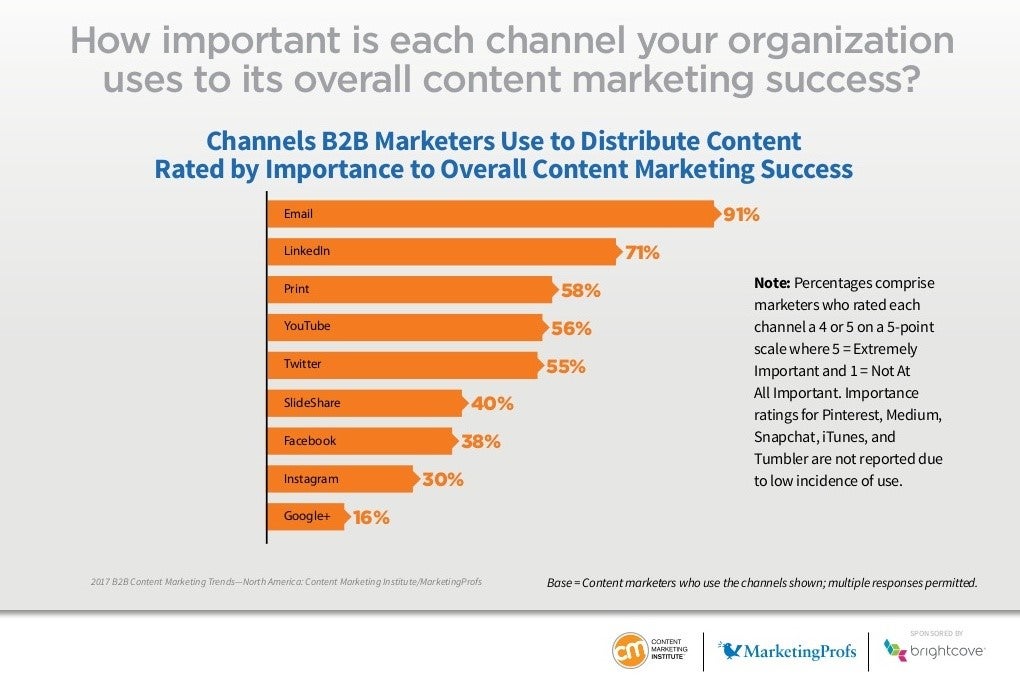 What I’m finding intriguing as we go into 2017 is the way major media companies are investing in email marketing. Data gathered by Campaign Monitor suggests that:

What to focus on

So, if you’re going to invest in email marketing in 2017 you need to know that email marketing these days is about more than simply loading up generic autoresponder messages to be blasted to your lists.

Marketing these days is too personalized to send the same message to massive groups of people. Data from Ascend2 suggests that, “The ability to segment email lists and individualize email campaign messaging are the most effective personalization tactics for 51 percent and 50 percent of marketing influencers respectively.”

The Epsilon Email Institute reports that “Automated email messages average 70.5 percent higher open rates and 152 percent higher click-through rates than “business as usual” marketing messages.” That’s huge, and it highlights the importance of planning an email marketing strategy for 2017 that’s personalized and responsive to the needs of your customers.

“Apple Pay and Android Pay have greatly improved the mobile check-out process, and PayPal does more than $14 billion dollars in mobile payments alone,” says Matt Smith, founder, Later. “Consumers are spending more time on mobile devices and mobile internet traffic is now greater than desktop.” Moreover, “mobile-first social networks like Instagram, and more frequent mobile-based searches on mobile devices, will make it hard for anyone to be a winner in the ecommerce space without a huge focus on mobile.”

“With brands like CVS and Samsung seeing success after implementing CVS Pay and Samsung Pay, more retailers will begin adopting this strategy [mobile wallets] as a way to engage with consumers and build loyalty with their brand,” says Don Hughes, CIO, Kobie Marketing. “Mobile wallets simplify rewards programs and offer opportunities to interact with consumers wherever they go. Retailers can even use these apps to offer time-sensitive and location-based vouchers and deals, which is a great way to surprise and delight customers and incentivize a purchase.”

Everyone from technology companies like Facebook to Microsoft and retail brands like J. Crew and Staples have invested in the space. And it’s clear why. Chatbots signal a more real-time, personalized approach to customer engagement. It’s ‘conversational commerce’ that, despite being a simulation, feels more human and authentic than most marketing. Bots offer a convenient, responsive form of interaction customers crave.

And live chat and chatbots are going to be even bigger in 2017, with consumers being able to conduct transactions via chatbots.

Messaging apps have surpassed social networks in terms of monthly active users, and in 2017 you can expect more online retailers to leverage chatbots on Facebook’s Messenger Platform to create a better online shopping experience.

Bots will change how customers shop online because, instead of being limited to browsing or searching, they will be able to get personalized recommendations based on their size, order history or preferences. Some sites are [already] sending their order confirmations and shipping information directly through Messenger instead of email.

“Social media already influences consumer behavior, but in 2017 it will become a bigger driver of direct transactions,” predicts Bart Mroz, cofounder & CEO, SUMO Heavy. Instagram recently rolled out a new feature that enables brands to tag products that are featured in the photos they post (much like the way a user would tag his or her friends). By tapping on those product descriptions, users are able to go to the brand’s website to learn more and make a purchase. In 2017, look for more social media platforms and more brands to bring the shopping and buying experience straight to users’ social feeds.

“Virtual reality (VR) is changing the retail landscape by fusing together the offline and online environment for enhanced customer engagement,” says Paul Miller, CMO Americas, Xero. “VR is making it possible for sportswear shoppers to test out gear in environments it would be used in or try on clothing in a virtual dressing room.VR is still in its early stages, but retail [in 2017] will greatly benefit from this increasingly popular technology.

1. Chatbot Startups
Chatbots are automated services that interact with and offer information to humans, especially consumers, through a chat interface. Chatbots are using Artificial Intelligence, which is one of the technologies that’s helping to make these system so mainstream.
According to Ashu Garg, general partner at Foundation Capital, a Silicon Valley venture capital firm, businesses will increasingly look to chatbots to help reduce spending on customer service, insurance and financial services. While according to Business Insider, more than 85 percent of customer interactions will not include a human being by 2020, and chatbots will be the number one consumer application of Artificial Intelligence during the next five years.
While Facebook is still the dominant messaging and social media platform, WhatsApp, Kik, WeChat and other globally relevant messaging platforms will boost chatbot innovation and healthy competition.

Cybersecurity was frequently in the news in 2016, thanks partly to Apple’s iOS encryption skirmish with the FBI and other tales of ransomware attacks against businesses. Many experts expect continued growth in the cybersecurity space in 2017.
5. Augmented Reality and Virtual Reality Startups

After the Pokémon Go phenomenon, augmented reality (AR) is on many people’s and innovative startups radar. AR’s big sibling, virtual reality (VR), also offers exciting potential for enterprises in 2017 and after. During the coming year, 30 percent of consumer-oriented Global 2000 companies are expected to experiment with AR and VR in their marketing initiatives. But VR won’t simply be a technology for entertainment. “In 2017, VR is going to be adopted by a lot more startups to collaborate with in-office employees and remote or gig workers,” predicts Zach Holmquist, CTO and cofounder of Teem, a cloud-based service for managing workspaces. “VR will be used to accommodate the evolving definition of ’employee’ to include both in-office and gig workers contributing remotely.
6. Innovative Wearables

The breakout hit Spectacles from Snap, the company behind Snapchat, which let people record and share up to 10 seconds of video, are “breathing new life” into the wearables category. It appears that Snap’s fun, quirky and inexpensive approach has the winning combination of features and pricing that all the other players missed in the first wave of wearables.
7. Intelligent Things

“Intelligent things” are at the intersection of AI and IoT and are among top 10 strategic trends for 2017. The internet of intelligent things goes beyond the execution of rigid programing models, exploiting AI and machine learning to deliver advanced behaviors and interact more naturally with their surroundings and with people. As intelligent things, such as drones, autonomous vehicles and smart appliances, permeate the environment, Gartner anticipates a shift from stand-alone intelligent things to a collaborative intelligent things model.